I’ve added a new page to my blog so that I may give you some insight into my reading habits and interests. Why is this relevant? It’s worth reading because all of the books that I’ve read over the last three years, which is well over 100, have directly influenced who I want to be as a writer. The characters that I hope to create and the plots that I hope to write would be vastly different if my reading habits were different from what they are. Perhaps you’ll discover a new series and come to enjoy it as a result of reading this page.

So, take a look at it sometime!

I recently completed the fourth chapter of my book, and it was the most difficult of the four chapters already written because this chapter sets the pathway for the rest of the story to follow.

The private investigator encounters the very people that he’s hired to help for the first time in this chapter and that encounter is many things. It includes sadness, gratitude, force, sexuality, remorse, and extreme anger all in a few short pages! He ultimately agrees to help them the best he can in their dire predicament.

This chapter was also almost the length of the first three combined, so that presented difficulties itself in that I spent more than double the amount of time editing the actual text than I have on any other chapter.

Two more characters were introduced to the reader as well. Carlos and Alejandra are the parents of Mercedes, the teenager who hired the detective. Carlos is a branch manager of a small bank in Houston and Alejandra is a stay-at-home mom. Their encounter with the detective is unanticipated and makes for an interesting interaction.

In the time since my last post I finished Red Light by T. Jefferson Parker and Sunset Express by Robert Crais. They are the second book in the Merci Rayborn series and sixth in the Elvis Cole series, respectively.

Finally. In the last ten days or so I’ve managed to start and complete the second and third chapters of my work.

The second chapter made its way onto paper almost exactly as I had thought it would. It was short, only about 1000 words, because it only further examined the relationship between the main protagonist and his main confidante and girlfriend. They discussed their thoughts on the potential client that made her way into his office earlier in the day. Mercedes, the potential client, would also be his first as a private detective. His office isn’t officially open, but it’s on the verge and she was the first person to go in after seeing his website.

The third chapter presented major difficulties in that I had gone through several different scenarios before writing it. I decided long ago that I wanted to put a white collar crime spin on the story, but when it came time to write about it I realized that it was a bit more complex than I had previously thought. I enlisted the assistance of a friend of mine who has a Master’s degree in business to help me on that end, but ultimately decided to alter the story slightly in order to write about a topic that I’m more comfortable writing about at this point in my career. I chose illegal drug activity instead (not because of personal experience!) This chapter didn’t quite get into the drug aspect of the story, but it acts as a lead up to that aspect in that chapter four is surely going to discuss that part of the story in major detail. Mercedes officially makes the decision to hire the private eye after being given the night to really consider the step that she was planning to take. The next part of the story will reveal to the reader the major criminal aspect of the story that must be resolved by the end of the book.

I want to reveal something about the work in each post, so…..the main protagonist, I’m not ready to reveal the name just yet, spent three years after earning his Master’s degree in criminal justice working odd jobs before realizing that private detective work was what he had been searching for. He then chose to open an office for his work.

In other news, I have read Ceremony by Robert B. Parker and Faithless by Karin Slaughter in the time since my last post. We all know that all writers started as readers long before ever writing anything!

The lead up to the completion of the first chapter of my book was extended and allowed for nearly every detail to be well thought out in advance of my actually writing it. I had spent countless hours lying awake in bed in constant thought regarding the opening chapter of what I hope will be my greatest work.

The chapter was quite literally a year in the making. I came up with the name of the main protagonist and made the choice to base him loosely off of myself in early 2012. It came after writing the first eight chapters of a story that I could not pursue fully because doing so would have forced me to make the choice between writing and school.

As far as the chapter is concerned, it simply serves as an introduction to three of the five main characters of the story. Two of these characters borrow the names of two interesting people in my life, Sydney and Mercedes. I thank you both for lending out your names to an aspiring writer!

Lastly, I aim to reveal a small bit about the relationship between the main character and the woman in his life that predates the start of the novel. You’ll just have to keep coming back in order to learn more about the characters and who they are! 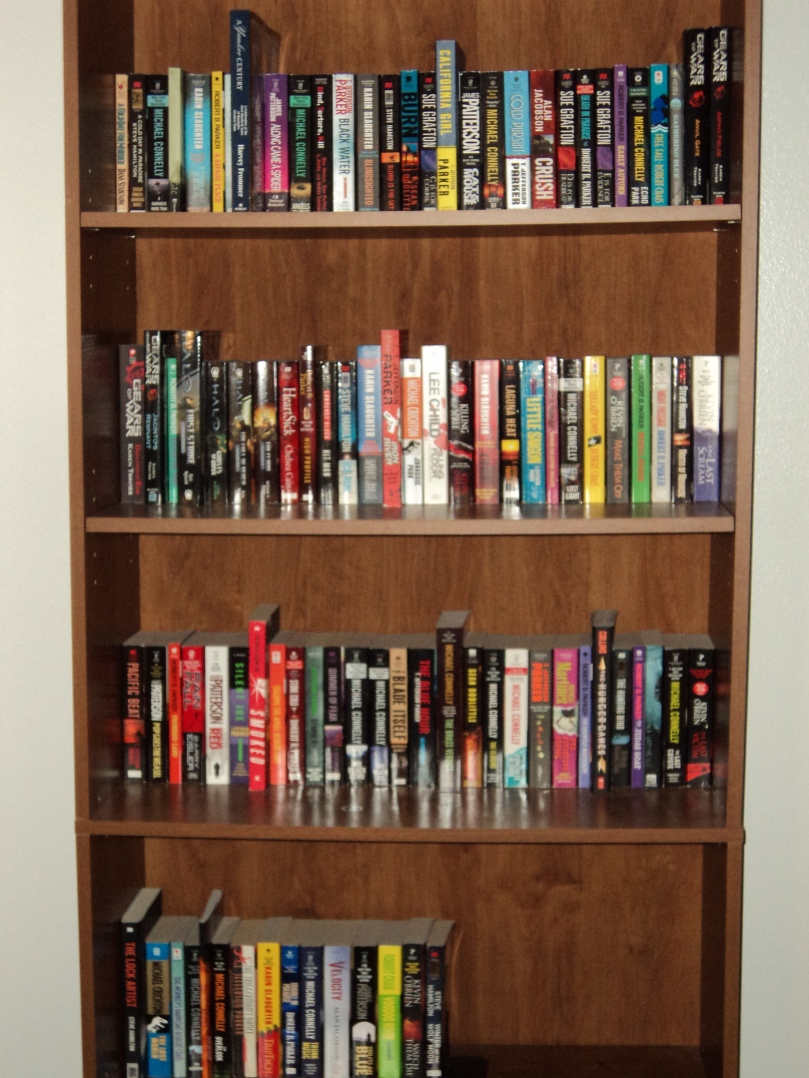 For my first post I want to talk a little about who I look up to in my writing. Every author on this and my other bookshelf has helped me realize who I want to be as a writer.

Robert B. Parker and Robert Crais have written two of the most iconic detective series of the last 25 years, and I can only hope that my reading of several of their books has allowed for my own writing ability to progress significantly.

James Patterson is a modern day crime writing icon, and any person who has wishes of entering the world of crime fiction would do well to read his work.

Steve Hamilton has managed to become a NYT Bestselling author after publishing his first novel via a writing competition co-sponsored by Minotaur Books and Mystery Writers of America. That’s something of a rags to riches writing story if you ask me. And inspiring.