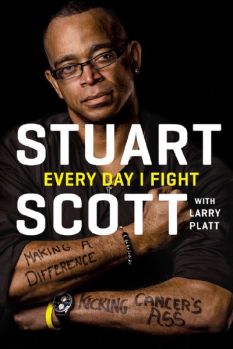 First off, do you know who Stuart Scott was? No? Well he was arguably the most popular anchor on ESPN’s flagship program SportsCenter. He’d been with the network for the past two decades and put a new face to covering sports. He’d also been fighting cancer for the last seven years.

He died January 3 at the young age of 49. I’ll admit that I cried when I found out, which was via text from ESPN early that morning. It wasn’t because I think death or dying is particularly sad, I don’t, but his death showed the impact he’d had on millions of people. There were moments of silence at NFL, NBA, and even college basketball games after his death. Other networks spoke incredibly highly of a man they only knew from afar. And athletes shared their personal stories. His memoir Every Day I Fight was originally slated for a May release. But now that he’s died it’s been moved up to March.

I have an issue with this. I understand that publishing is a business. Anyone who says otherwise hasn’t got a clue, but this was already a surefire bestseller. Stuart Scott was open about his battle long before he wrote this book. And he was watched by millions on ESPN. So I don’t understand why Blue Rider Press (an imprint of Penguin Random House) has decided to change the release date. Quite frankly, I find it disrespectful to Stuart Scott and all of his surviving family. I have no idea how future royalties will be paid out, but it doesn’t matter. I’m sure his family would rather have him back instead of money from a book he wrote.

And I bet some of you will think that at least he’s getting to tell his story, uh no. He was already going to tell his story, but it just so happened that he died a few months before the book’s release. You and I both know that the book would have moved forward with the May release date if he were still alive today. But he’s not and it gets moved up.

Anyway, you can access the book’s Amazon page here. And if you’ve read all of this without having any idea who I’m talking about, well watch this. It’s a speech from last year’s ESPY Awards that he gave after being given the Jim Valvano Award for Perseverance.