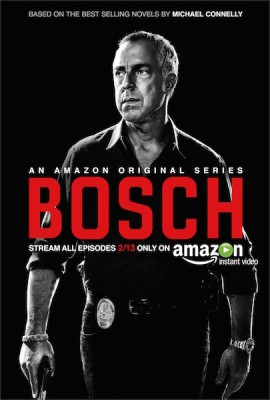 As you well know, Fifty Shades of Grey is officially out today. Oh brother. All the moms and teens are likely flocking to their local movie theater this weekend to watch the movie in the same auditorium as a couple hundred other people. I just feel bad for the guys who are being dragged alongside.

Moving on. Anyway, there’s another series adaptation being released the exact same day and I assure you that it will be significantly better onscreen than this other crap. So what am I talking about? Bosch! It’s the Amazon Studios adaptation from Michael Connelly’s bestselling Harry Bosch series! I’ve written about it twice before and its release is finally here. The first season consists of ten hour long episodes and it’s Amazon’s first foray into the hour long drama that we see basically everywhere else on TV.

The series will follow LAPD detective Harry Bosch during a tumultuous time. I won’t say any more because either you’re going to watch it or you’re not and it’s not my job to do the convincing.

You’ll be able to stream all ten episodes of Bosch starting today in the US and if you’re interested you’ll have to see when and how it’s available in your country. Just a little perspective, the pilot episode that helped make the series a reality currently has over 13,000 reviews on Amazon and a ridiculous 4.7 out of 5.0 rating. This is not your typical cop show.

You have to be an Amazon Prime member to watch. You can read more about and watch the show here.

Bye now, I’m off to see how quickly I can get through all ten episodes!