I’m not a travel blogger and I’m not going to be. But I’ll do my best for the next week.

My plan was to leave my place at 8. I didn’t. Ended up leaving around noon. I was sleepy. But that didn’t change the first stop on my trip, the George Bush Presidential Library in College Station on the campus of Texas A&M. My third presidential library. 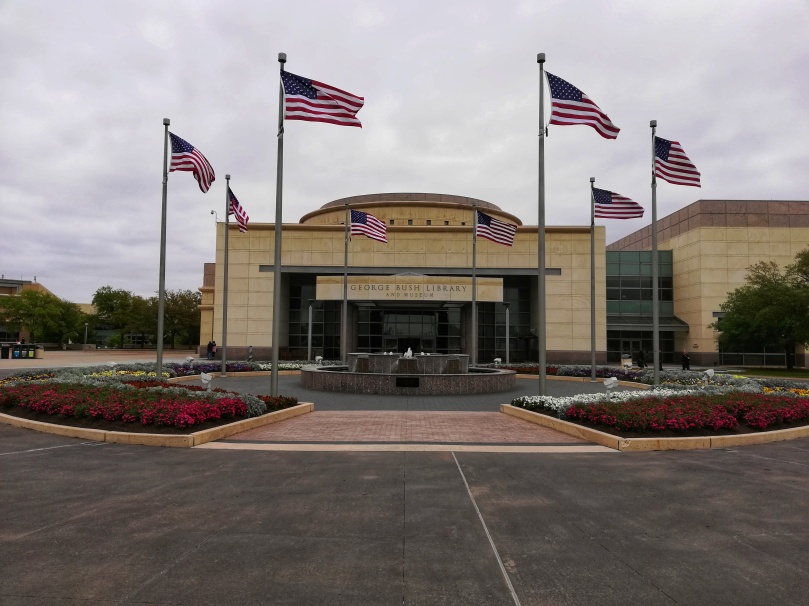 Immediately you walk into this grand foyer. By far the best entrance of the three presidential libraries I’ve visited. 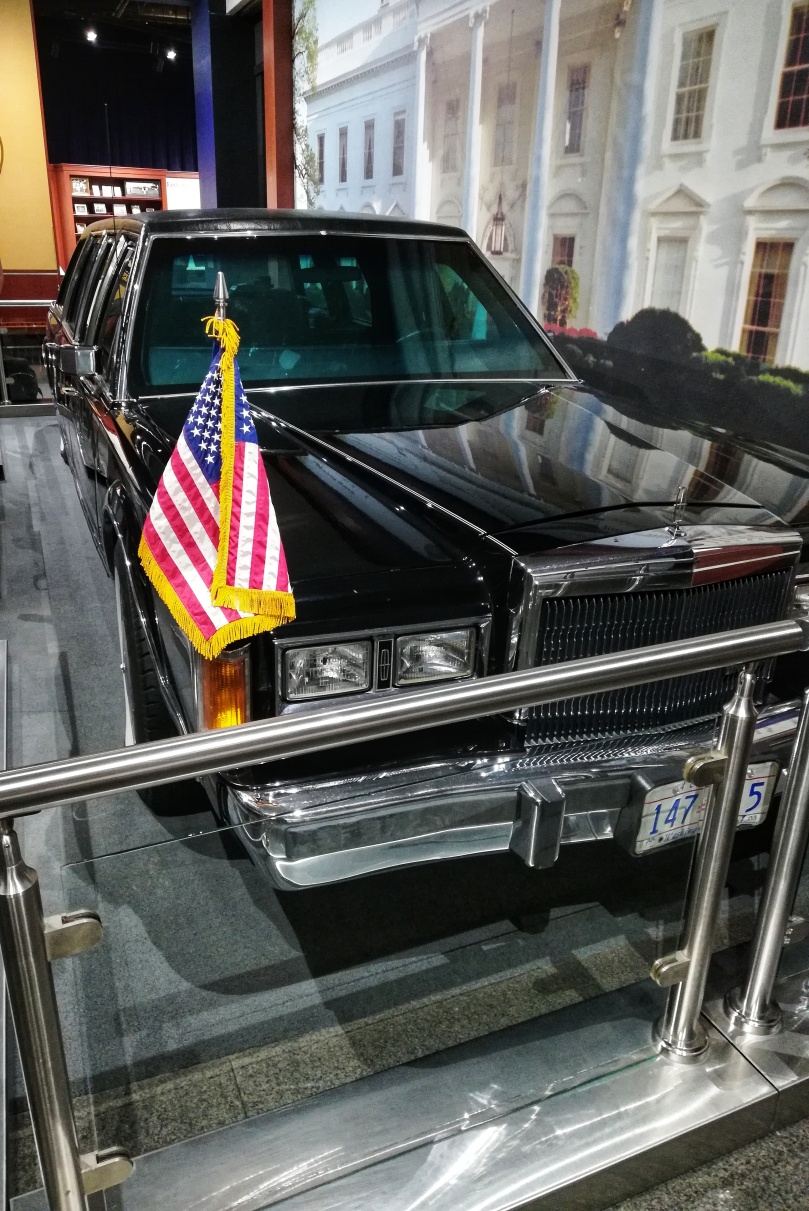 Once you make your way further inside you get to see The Beast. My second time seeing one of these in person. They don’t look like much, but it’s basically a tank. I’m exaggerating, but not much. 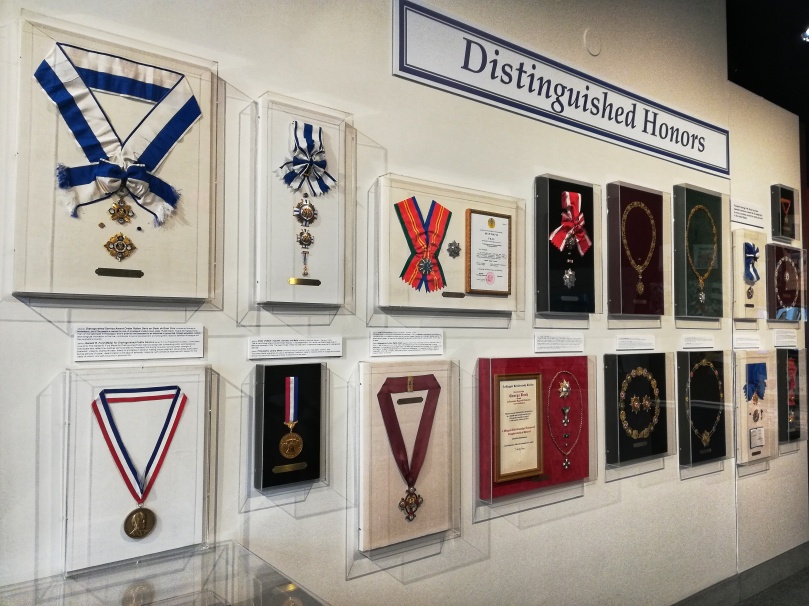 The museum takes you through the life of President Bush (I had no idea he played baseball at Yale), but I was surprised at how few personal items the museum has on display. Most of the museum is old photos and the best exhibit was on terrorism.

It had another car, some dresses, and a few gifts the family had received. Most of the museum is interactive in some way, which is what I’ve come to expect from just about any modern museum.

Of the three presidential libraries I’ve now visited, this one was by far the busiest. My guess is it was because of the recent deaths of George and Barbara, but I don’t know.

Final takeaway: The museum was nice, though small. When compared to the LBJ and JFK libraries, it isn’t as extensive as LBJ’s and is about on par with JFK’s. Likely because they were both president for a short time.

After my late start I scrapped the rest of the day’s plans because I still had another three hours to drive to Dallas, where I am now.

Day 2 will likely be another short one because all the museums either open late or don’t open at all on Sundays.

I’ve decided to change things up around here. I’m changing everything, actually.

The blog has been about books since day one. Starting tomorrow I’m going to document my travels instead. It’s not like I have a long list of places I’ve visited. In 2016 I visited Austin and DC. In 2017 I visited Boston. This week I’m going around more places in Texas, which will include my first time visiting the Alamo.

PS: The next week of posts will be about my trip through Texas, but I’ll go back to books starting April 8 with my newest video. 😉

Yes, that title is awful. Sue me.

I remember reading at the end of last year about the top selling books of the year. I’d have to go back and check, but there were maybe five that reached the one million threshold.

Michelle Obama’s memoir is said to be on pace to sell 10 million copies, which would be the bestselling memoir ever.

And President Obama’s memoir is still on the way! 🤑

Have you ever asked yourself why you do something? I asked myself why the heck I read and this video is part of that answer! Even if you don’t feel like watching, I want to know why you read!

Last week was coupon week at Half Price Books and you know I lived there for the week. Here’s what I got: 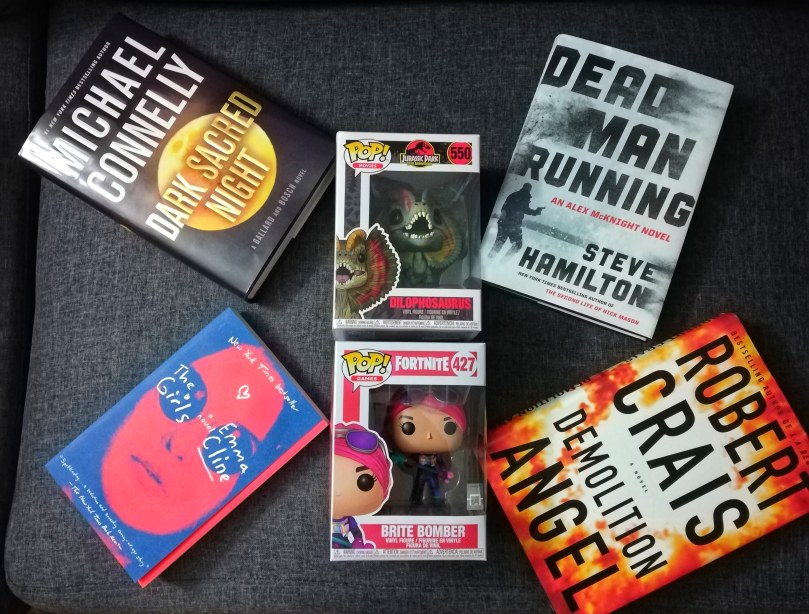 Y’all. If you haven’t thought about what you’d take when escaping a fire, then what are you doing? 😂

But really, it almost happened last night. I’m watching TV on my couch after work and I hear that blaring fire alarm sound we all know. So I jump into action. I got some trash bags and started throwing my books in. Wasn’t thinking about which ones or which authors, I was just focused on any of them.

After making it through maybe 50 books, I started hearing people laugh outside and the alarm had stopped. So I stopped. There’s nothing else I own that I’d care to take. Nothing else. What about you?

This is a fun topic for me because I always feel like everyone is against me, but that’s okay! I’m standing my ground and fighting y’all off! Ha. Watch and tell me what you think!

I’ve been really open about my reading slumps. I always know one is lurking just around the corner. It doesn’t matter how much or how little I’m reading. There will always be periods during which I simply will not read. I’m in the midst of my first one of 2019 right now.

I’ve finished one book in the last month. Even knowing this I just haven’t had the desire to read recently. My current book is on my coffee table. A few nights ago I started it and only read about 30 pages before deciding to sleep. I haven’t picked it up since.

I don’t have a plan or something specific I do when this happens. And y’all know that sometimes one of my reading slumps can spread out over multiple years. I don’t think that’ll be the case this time around. Here’s to hoping it isn’t.

What do you do when you experience a reading slumps?

Spoilers ahead (but who cares, it was published 80 years ago.)

It happened again. I may need to lay off books published before 1970 because clearly I have issues with just about every one I read.

I decided to read this after playing around online and looking up detectives I’d never read before. It didn’t hurt that Raymond Chandler is something of an icon in mystery circles. But, oh boy.

Philip Marlowe is a PI in LA. The book was published in the 1930s, so I guess the assumption is that it takes place during the same period. There are a number of mentions of prohibition. He’s hired by a rich guy who’s getting blackmailed.

I’m going to start with some of the positives:

I’m not exaggerating or trying to be silly. There is nothing I can point to in this book that I really enjoyed. But don’t get me started on the negatives.

The writing style made me want to claw my eyes out. How many times can one person say “you’re cute” in a single work? My goodness. No creativity whatsoever.

There are two women who have prominent roles in the story and both of them (they’re sisters) separately are throwing themselves at Marlowe. Ugh. But he’s got the moral compass of Jesus and takes neither of them up on their offer.

Multiple times during the story he slaps women across the face.

There is absolutely no action throughout the story. I kept thinking at some point something would have to happen. Nope.

Twice he went into bad situations without a weapon of any kind against fully armed guys. And twice he got out just fine. Okay, fucking Zeus.

His wit and humor are awful. He’s not funny. Clearly he influenced later detectives, but they’re much better written.

Everyone was smoking the whole book. I have cancer now.

Definitely do not recommend to any reader, ever. I can come up with several modern detectives much more intriguing than this bozo.

I had no idea this was even in the works. Then I stumble across the news on Twitter (because that’s where all news is truthful and factual, right?). Anyway, as soon as I read about the deal I knew I wanted to make this video about it, so here we are! Watch and tell me your thoughts!