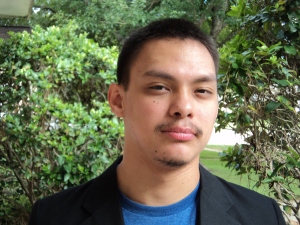 Check out my BookTube channel.

I’m 29. I graduated from the University of Houston Downtown with a degree in criminal justice in May 2013. I published my first book, Divided Within, on October 29, 2013. And when I’m not on here posting something new, writing my next Andrew Banks novel, or reading a book….I’m probably sleeping. I’m kinda boring like that. And I have a newer blog all about sports here.

A few random things about me: I LOVE country music. As in I am singing some country song everyday. I’m really awkward around people I don’t know. I’m horrible at job interviews. I went skydiving twice in one month in 2011. The number one place I want to visit before I’m gone from this lovely world of ours is the Galapagos Islands. I have three tattoos. AND last but not least, Jennifer Lawrence is marrying me.

First off, my name is John Guillen, which you most likely already know. I was born all the way back in……wait a minute, I don’t think you want me to go back that far. Let me start over.

I discovered my love for books and writing and all of that fun stuff during my middle school years. That was about ten years ago now, though I remember several events like they happened yesterday. In elementary school we got to go to the library and check out books, but I think perhaps I was a bit too young to realize my own passion for what we call the written word. I always made my parents buy me books at the book fairs, though! But my middle school had what I thought at the time was an immense library, but now that I think about it it may have been ten or twenty shelves. So it wasn’t exactly the Library of Congress. I can remember the first real book I ever read, at least it’s the one that I’ve had stuck in my mind all these years as being the first. It was Crispin: The Cross of Lead by Avi. Now I’ll be honest, I can’t give you a detailed plot description or any real description of this book at all because I read it at a time when I myself didn’t even realize what it would ultimately mean for me. I can only say that I’m happy I decided to read this particular book. Who knows, perhaps I wouldn’t have written a book of my own if I hadn’t.

You see, the crazy thing is that it would take me another four years to truly begin to realize the significance of that read. As a seventeen-year-old kid I knew that I only wanted to write and write and write. That’s it. The first person I ever told about this little dream of mine expressed complete confidence in my future ability to do so. This was at a time when I was probably an above average writer as a senior in high school. I remember that conversation perfectly.

I stepped foot on campus at the University of Houston Downtown for the first time in the fall of 2010. I had every intention of majoring in business. Well, during orientation I had one look at the degree plan and knew right away that it wasn’t for me. There were some math and science requirements that I just didn’t want to deal with. After all, I wanted to be a writer, right? Then I looked at the degree plan for a major in history. I liked what I saw but I’m a realist, there aren’t many career paths for a degree in history. So that first semester I took some time to really think about what I wanted to do after my time in college was finished. I realized that nearly my entire personal little library of books fell into the crime fiction genre. Light bulb! I declared my major in criminal justice the following summer.

I’d taken two classes that summer following my first year in college and did the math to see how early I could graduate. I came out to May 2013, though I would have no break during my last two years of school. I thought for about eight seconds and decided that I would walk across that stage in May 2013 no matter what I had to do. After four maxed out semesters, three different mini-mesters, and a summer course load in the middle of it all that shouldn’t have been allowed, I did it. I earned, with honors, a bachelor of science degree in criminal justice in three years flat.

But the story doesn’t end there. You see, one might think that I missed out on the whole college experience. And that is certainly true, but that wouldn’t be taking into account the goals I’d set for myself during that time. I can tell you for certain that I had just the one goal. Can you guess it? Become a better writer. That was it. That was all I wanted out of my time in college, well, along with a ring and diploma. I was fortunate enough to take all of my English classes with a professor from an Ivy League school. He asked me that first semester during a one-on-one discussion of one of my papers if I’d considered a profession in writing. I knew then that I’d made the right choice for me and carried his words with me the rest of my time in college.

One question that I’ve been asked more times than I can possibly remember since graduating is how come I didn’t major in English or creative writing or something along those lines. And, I do admit, that this is a valid question. But before I get into my answer I’d first like to share with you an idea that my favorite college professor shared with all of his classes. At least I think he did. The first time I heard it was in my second semester in school, that would be spring 2011. He told the English 1302 class that if we read 50 perfectly written books during our lifetimes that we would be able to write anything we wanted. Keep in mind that the major goal of this class was to turn in an actual research paper. I think it made up half of the overall grade. Now, when he told this to the class I was skeptical. In 2010 I read 31 books, so he was saying that I was nearing the point at which I would be able to write anything I wanted. That sounded a little crazy. Well, suffice it to say that the paper I turned in to him at the end of that semester was by far the best I wrote during my three years in school. The topic I chose was IQ and the death penalty, and if you aren’t aware, the two go a lot more hand-in-hand than you might think.

Anyway, back to the question that asks how come I didn’t major in English or creative writing. It’s because I’ve come to realize that my professor was absolutely right. The idea that one could read perfect language over and over and over again and not be able to produce a well-written anything is crazy to me. Now I’m not saying that my writing was perfect during my last two years of school or that my book is now, but I am saying that I firmly believe in the philosophy that all great writers were first great readers.

And now we’re here. I spent the entire summer after graduation writing my first book. I’d had the idea in my head since the start of 2012. I managed to finish the first draft a little less than three months after starting and spent another month rewriting and receiving feedback. My first book, Divided Within, was released on October 29, 2013!